When David Ponsart first heard of HIV, he was in fifth or sixth grade and he was scared.

So HIV and LGBTQ+ issues were always on his radar. In high school, as a member of the student newspaper, David did a lot of stories on those issues. When he came out in high school, he faced many of them head-on.

“When I came out in high school, I was basically tortured,” David said. “I ended up carrying mace with me, which was not strictly legal.”

It was a matter of happenstance that led David to formally start working in the voluntary sector around LGBTQ+ issues. 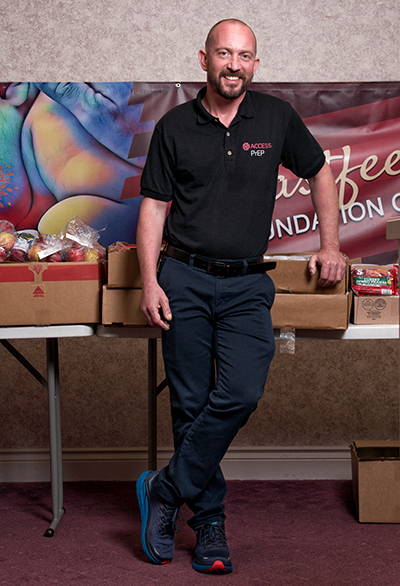 “My friend’s mom was a nurse and she was teaching a nursing assistant class. As a favor, we went to the Midwest Aids Prevention Project (MAPP) in Ferndale to pick up some supplies for the class, and we ended up meeting their CEO.”

It turned out that there was an open position with MAPP. David applied and got the job.

David ended up resigning after two more years with MAPP, retreating to the private sector. But David couldn’t stay away for long.

So two years after leaving MAPP, David started volunteering for the organization and ended up joining the board. He also started dating his now-husband, Chris. Thanks to David’s connections, Chris, an Arab-American, was brought into ACCESS (Arab Community Center for Economic and Social Services) to help do outreach to other gay Arab/Middle Eastern men about AIDS prevention through their Infectious Disease Prevention Program. When the program manager made a career change, Chris took over as the supervisor. Together, Chris and Daivd started building the program at ACCESS that David now runs.

“We started with about $50,000 and a population that was virtually impossible to reach,” David said. “In the Arab community, being gay is extremely taboo. Chris and I would meet people in the gay bar, and we’d be like, ‘Hey, are you Arab?’ And they’d say something like, ‘No, I’m greek.’ or ‘No, I’m Latino.’ And it’d be like, well that’s funny, because you said your name was Ali, but OK, you’re Greek.”

Their grassroots effort started with underground gatherings in Chris’ apartment, which then moved to David’s slightly larger house as the group grew. With that growth, the couple received more funding, and eventually were funded by the CDC to do HIV testing.

“We targeted young, gay Arab men between the age of 18-30,” David said. “The idea behind our intervention was that if you got enough of a percentage of a population to change those social norms, the changes would disseminate to the entire community.”

When Chris left the role to take a job at the State Health Department, David stepped in to lead the program.

“We were out to dinner with some folks from the State Health Department who we’d gotten close to over the years, and they were kind of like, ‘Well, how are you going to top this, what Chris has done?’” David said. “And in my head I was like, ‘Well I will show you. Challenge accepted.’”

That ambitious attitude has led the ACCESS Infectious Disease Prevention Program to grow by leaps and bounds in the years that David has been at the helm.

From a sometimes reluctant gathering in an apartment, it has grown into a program that offers a comprehensive set of services, offered at three locations, that are designed to prevent, treat, and reduce the harm associated with infectious diseases, with a focus on HIV, sexual health and injection drug use.

For David, his passion and drive to make a difference comes as second nature. He attributes this to his family.

“We have a culture of service to the community in my family,” David said. “It’s just part of who we are.”

Both of his parents volunteer regularly, two of his sisters work in healthcare, and the third sister routinely organizes fundraisers for her community. Facing discrimination himself had also hardened his resolve to provide a safe, non-judgmental space.

“The way we get treated, especially when it comes to our sexual health, it’s hardened my resolve,” David said. “It’s not going to be like that here. I don’t care if you’re a sex worker, a drug user, or just a gay guy looking for help, you will be treated like a friend. You’ll be treated with respect.”

“People would say back then that there is no such thing as gay Arabs,” David said. “You’re either gay or you’re Arab, but you can never be both. So often, that intersectionality is ignored. And Chris was tired of it. He said, ‘I really want to have a party in a gay bar where we play Arab music.’”

So the idea for Arabian Nights was born. It has since grown from a house party to an annual fundraiser for Al GAMEA hosted at various gay/lesbian bars in metro Detroit. The funds raised support Al GAMEA’s Emergency Shelter Assistance Program for Middle-Eastern LGBT people who have been ousted by their families.

“I know that we have made an impact,” David said about the changes he’s seen in the Arab/Middle Eastern community. “I believe it. I can see it.”