Born in the Chicago suburbs, Kim Collins escaped into nature when she went to Blooomington, IN for college. She spent the next 15 years immersed in the outdoors, earning two degrees, including her Masters in Outdoor Recreation. During that time, she met the love of her life, Kate. After about seven years working as the assistant coordinator for IU Outdoor Adventures, Kim was looking for a change.

“At that point in my career, it was either go back to school for a PhD and teach full-time or become the director of a program somewhere. But I still wanted to work in the field. However, at the same time, I didn’t enjoy the outdoors as much because I was out there so often for work,” Kim said. 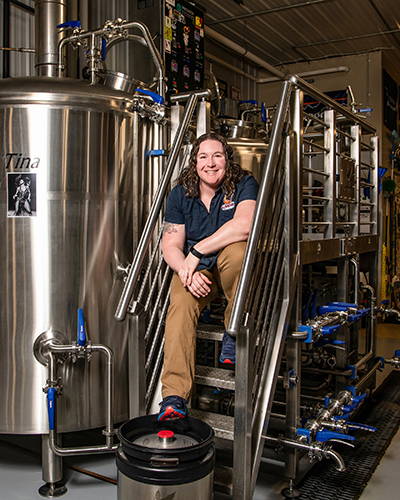 Those forced forays in the outdoors led Kate to ask Kim, as Kate was wont to do, the question that became a turning point in their lives, “If you weren’t doing this, what would you do?” The answer was “food, beer, or music.” And while her current role as head brewer and owner of Guardian Brewery in Saugatuck lets her combine all three passions, she originally chose professional brewing.

“I was doing a little bit of it at home at the time. So I knew a bit about it, and I knew I loved the culture,” Kim said.

At the same time, Kate was looking for a professorship. The two had already decided that Colorado was the place for them when Kate heard back from Metropolitan State University in Denver. The two moved to the mile-high city, and Kim was able to teach with Kate while dipping her toes in the brewing industry. Kim ended up brewing in Colorado for five breweries in five years when the two were again at a crossroads.

“We weren’t finding enough water out there to brew. It’s very different there. Water is a scarce resource,” Kim said.

Kate once again asked the question that led the couple to another turning point.

“Leave it to Kate to play the what-if game. Well, what if we didn’t stay in Colorado?” Kim said.

So the two started looking for the perfect place to set up their brewery. Between places in Oregon and Madison, WI, it was Saugatuck that ended up being the perfect place for them to set down roots and live their dream of running a brewery.

“We must have looked at more than 100 properties, from Muskegon all the way down to New Buffalo, and we just kept coming back to Saugatuck and Fennville. It hit all our marks,” Kim said.

Kim has all the recreation her heart desires on the shores of Lake Michigan, and a thriving downtown allows them to have a diverse customer base without actually having to be downtown. The open community of Saugatuck was also a non-negotiable for the couple.

“We wanted a place to feel safe and open not only for ourselves, but also for our staff. If they’re walking down the street with a Guardian shirt on, we didn’t want that to be an issue,” Kim said.

Kim and Kate wanted their brewery to be just as open and welcoming as the town they settled in.

“We really wanted it to be that third place that people spend their time - home, work, and Guardian,” Kim said. “No matter where you come from, your skin tone, or if you’re gay or straight or trans, we wanted everyone to feel safe and welcome. Kindness is the thing that we’re pushing forward with most with our servers and staff.”

Kim also aims to support the community that the two now call home with philanthropic efforts, whether that means volunteering time or donating money.

“We just did our largest Black is Beautiful Beer, donating 100 percent of the proceeds to the Lakeshore Ethnic Diversity Alliance,” Kim said.

The Black Is Beautiful Initiative is a collaborative effort to raise awareness for the injustices people of color face daily and to raise funds for police brutality reform and legal defenses for those who have been wronged. Breweries who participate must donate the proceeds to a local organization whose mission aligns with that of the initiative.

It’s important for Kim that they are supporting diverse communities of all kinds, especially the LGBTQ+ community.

“I want people to know where they are the second they show up,” Kim said. “What we stand for, who we are. We are 100 percent LGBTQ-owned, 100 percent women-owned. I want us to be out. And I want us to be counted. Because it’s rare. And we want to make it safe.

“Kate and I have been to at least 400 breweries together,” Kim said. “We knew what we wanted when we were planning our own place. We wanted it to feel warm. We call it the soul of a brewery. We wanted you to walk in and say ‘this place has a soul.’ ”