Dave Garcia grew up surrounded by corn and soybeans in a Michigan town with a population of less than 500. It was such a small town that residents had to walk to the local post office to get their mail. There wasn’t much to do in a town that small, so he grew up going on nature hikes, following the railroad tracks, and just generally being outside.

After graduating from Swartz Creek High School (where he ran the 400 and 1600 relay), Dave found himself becoming a single father at 21 years of age.

“At the time, I thought I was bisexual," Dave said. "We’re all very close now, but I was a single dad when Gabe was growing up." The fact that Dave was a single father when he came out publicly made the repercussions from his announcement all the more distressing. 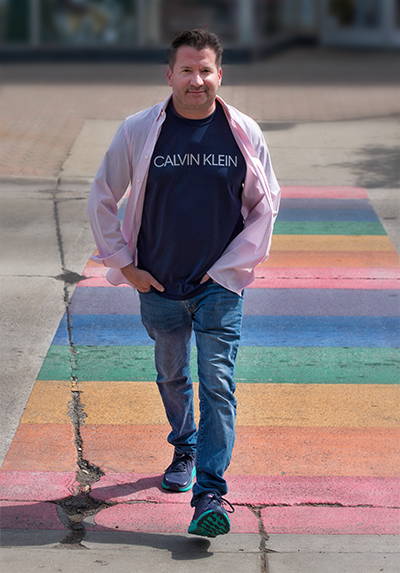 When Dave was working as the Community Services Coordinator for the Swartz Creek School District in 2000, only his older brother and Gabe’s mom knew Dave was gay. Dave was approached by a group of LGBTQ kids who needed some help.

“The administration wasn’t doing anything to protect these kids,” Dave said. “And they trusted me, without knowing I was gay. They trusted me to help. So I told them, I would come out with them and we could do it together.”

“I talked to Liz Shaw at the Flint Journal,” Dave said. “I told her about five new programs we were going to be offering, including a survivor group for women who were being domestically abused. And the last one was an after-school support group for these gay teenagers.”

Dave also went on the record with Shaw that he, too, was gay.

“So Liz Shaw writes this article, and it’s front page news, that ‘Swartz Creek Admin Comes Out and Starts Support Group,’” Dave said. “When I got to work on Monday, my desk was in the hallway.

“It got really bad. I was forced to leave my position. My truck was repossessed. I had a one-year-old at the time. And back then it was legal to fire someone in the state of Michigan for being gay.”

But instead of trying to undo the damage, hiding, moving, or somehow putting that cat back in the bag, Dave decided to take a stand, to fight back however he could. To do something small, but meaningful to him, to bring attention to what was happening to gay youth.

“I decided I’m going to walk from my old high school, Swartz Creek High, to Lansing. Overnight. In winter,” Dave said. “At first I was just going to take my journal, to write and walk. The next thing I know the head of the Michigan Unitarian Church called me and said, ‘Can we come with you?’”

After that, Dave got a call from Jeff Montgomery, the founder and leader of the Triangle Foundation (now Equality Michigan), formed initially to assist victims of anti-gay crimes and to work with police and prosecutors to change the culture of how anti-LGBT crimes were treated.

“‘I hear you’re walking to Lansing,’ Jeff said. ‘Is anyone coming with you? Do you have protection?’ And there was a long pause and it was clear that my answer was ‘no.’ And he said, ‘Well, I think that’s a really bad idea.’ Next thing you know, there’s over fifty people meeting me to join me on this walk.”

After Dave’s walk, at the conclusion of which he gave a brief speech, Dave was contacted by the University of Michigan with a job offer. Dave ended up working for the Ann Arbor YMCA, and eventually became the executive director of the Kalamazoo Gay/Lesbian Resource Center (now OutFront Kalamazoo), and then finally landed at Affirmations in 2011.

“After two and a half years as the Executive Director of Affirmations, Gabriel was about to graduate high school and I was about to turn 40,” Dave said. “And I thought to myself, if I’m ever going to leave Michigan, now is the time.”

Stepping into the newly created role of Director of Public Policy and Community-Building for the Los Angeles LGBT Center, Dave would spend the next five years learning, shaping and growing one of the largest LGBT organizations in the world.

“I knew that I could stay there forever, and have a great, rewarding career,” Dave said. “But Affirmations was in trouble.”

In the time since Dave had left Affirmations, they faced increasingly difficult financial challenges, to the point where they might have to shutter their doors.

“Affirmations approached me and asked if I would come back,” Dave said. “I realized that I believed that Affirmations was too important to the state of Michigan, to the youth of Michigan. And there are a lot of people who can do my job in LA, but there aren’t a lot of people who can come to Michigan and turn things around as soon as they needed to, who already had the necessary relationships with the community, donors and foundations that would bring Affirmations back into the black.”

And Dave has done just that. Right before COVID hit, they had their first audit that showed their books in the black.

“When I was growing up, I was always running away from being gay,” Dave said. “But now I’m running towards something, I’m fighting for my home and for the youth. The young people need me here. We can do this in Michigan. We can do this at home.

“There are some times in life where it’s just your responsibility to do something. I would have spent a lifetime regretting not fighting when I should have. And not coming home.”