Born in Lansing and raised in Portage, MI, Jackie Green has been shopping at Gazelle Sports since her first 5K in fifth grade. She’s also gearing up to start training this summer for the Boston Marathon. But that’s not the only reason we love her. The co-host of The Gray & Green Show on 105.3 HOT-FM is a staunch advocate for intersex youth.

“I found out that I couldn’t have children and that I was born different when I was seven years old,” Jackie said.

Jackie is one of the approximately 1.7 percent of the population born intersex. In her case, she was born with complete androgen insensitivity syndrome. People with this condition have XY chromosomes that are typically seen in males but develop externally female due to the body not responding to androgens or testosterone. 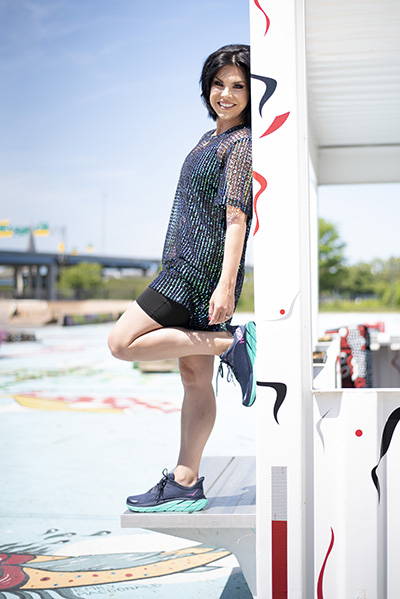 “When people say gender is fluid, there really is more to it,” Green said. “Biology shows us that, yeah, it really, truly is fluid. Even though my chromosomes are XY, I’m completely externally female. I don’t have any internal reproductive organs.”

While Jackie doesn’t currently have reproductive organs, she wasn’t born that way.

“I did have internal testes that were producing estrogen,” Green said. “That was what made me grow up to be a girl.”

But at age 15, doctors convinced Jackie’s parents that her testes should be removed. They were told that keeping the testes could increase Jackie’s risk of cancer and be “mentally damaging” to her as a young woman. They led Jackie to believe that she was having a hysterectomy. This decision also forced her into hormonal replacement therapy.

Green's parents trusted the doctors to help guide them in making the right choice. And in doing so, they inadvertently took away Jackie’s chance to make the choice herself.

For years, Green lied about her condition.

“I let fear of people finding out that I was different keep me quiet,” Green wrote in an article for West Michigan Woman.

But Green isn’t keeping quiet anymore. After meeting more intersex people and learning more about how those with intersex conditions are treated by the medical community, she knew she had to tell her story. She is using her platform to advocate for intersex youth, to make sure that young people have full, consenting control over their body.

“I want kids like me growing up, knowing about their own body, understanding it, so they can make a safe decision based on what they want for their own body,” Green said. “Some kids are forced under the knife when they’re one or two years old. That’s upsetting. And it’s wrong.”

Green wrote in the 2017 story for West Michigan Woman revealing her condition:

“I am now passionate about stopping medically unnecessary and irreversible surgeries like the one performed on me. Surgeries on intersex individuals are driven by fear—fear of a body that they don't understand and can't check in a "male" or "female" box on a piece of paper. These surgeries are human rights violations, and in the future I want other intersex people, especially young people, to not feel shame.”